The downtown Glen Rock area is on the National Historic Registry. The town and surrounding area is steeped in nearly 200 years of history. Home to the Glen Rock Carol Singers, and once a major hub in train history, as well as boasting other historic significance, click here for a fascinating resource about the Glen Rock area. As the oldest building in Glen Rock, the Glen Rock Mill Inn is steeped in history. From i’s construction in 1837 until the turn of the 20th century, the Mill functioned as a working saw, woolen, and grist mill. In the past 25 years, the Mill was transformed into a full service upscale historic restaurant and inn.

1837 until the turn of the century

In 1832, Simon Koller built a water powered sawmill on the current spot occupied by The Glen Rock Mill Inn. The spillway to the race created a 15 foot waterfall whose roar could be heard all over the Glen for 101 years until the flood of 1933 destroyed the dam.

In 1837, William Heathcote, the founder of Glen Rock purchased the sawmill. A native of Cheshire England, he migrated to Pennsylvania in 1826 and for 10 years operated woolen mills in Chester County. Upon purchase of Koller’s farm, he married Simon Koller’s daughter and began building a brick woolen mill on the foundation of the then abandoned saw mill. The building is the present day Glen Rock Mill Inn. He installed a 10 foot water wheel and by 1839 began the manufacture of woolens. He sold building lots off the farm and a small hamlet began developing around the woolen mill.

By 1848, several more Heathcotes had arrived from England and the ancient English custom of carol singing on Christmas morning began in Glen rock when four members of the family accompanied by James Heathcote on the bassoon, sang carols on the streets of Glen Rock for the ten families then living there. This tradition has since been carried on every year by the people of the town of Glen Rock in the name of The Glen Rock Carol Singers.

By 1852, William Heathcote sold the mill to Philip Schaeffer and Charles Olp who immediately converted it to a grist mill, installing six grinding stones. They operated here until 1866 when Philip Schaeffer’s son William took over the business.

In 1880 William Schaeffer sold the operation to George Saltz who after continuing the business for five years sold out to Israel Gladfelter. In 1918, R. Frank Owings came out of Maryland and purchased the Glen Rock Flour Mill. He and his brother Thaddeus began the manufacture of the well known June bug poultry and Livestock feed. The death of R. Frank Owings in the 1960’s precipitated the gradual demise of June Bug feeds. 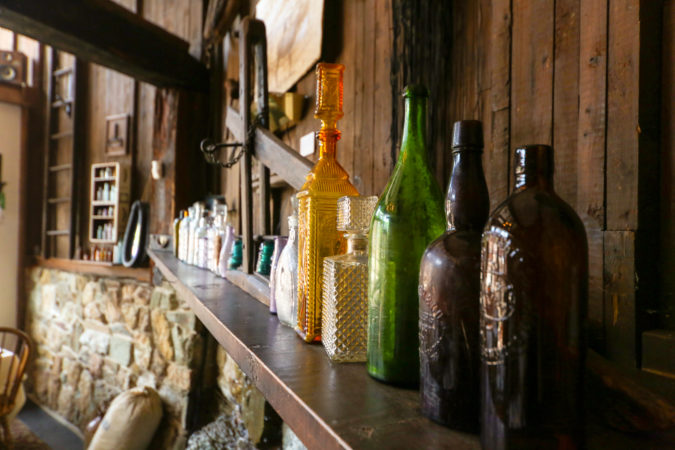 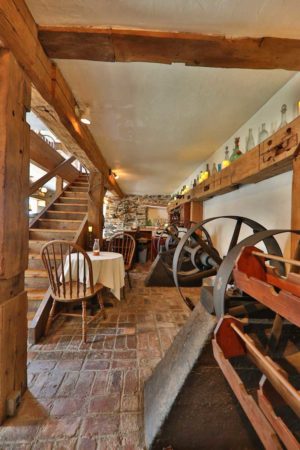 In the 1960’s, the mill closed and eventually deteriorated. The historic building sat closed and shuttered, roof sagging almost to the point of collapse. In 1984, the mill was purchased by Cecil and Mary Ann Artrip for $7500, beginning a million dollar restoration project that would last over two years to repurpose the historic building into an inn and restaurant. The Artrips were fascinated with the history of the mill and incorporated many original mill items into the renovation. In the Fountain room, the mantel above the fountain is made of the original 22 inch wide counter from the mill’s sales room. The east wall wainscoting is made of the original foundation stones from Simon Koller’s sawmill. In the wine cellar, part of the mill wheels have been converted into a revolving wine rack. Pulleys from the original millworks machinery hang throughout the mill, repurposed into chandeliers. Massive original hand hewn beams support the ceilings in all of the dining rooms, many running the full length of the building on one piece for 45 feet. Under the floor, the original mill race still runs. Throughout the building, many historic artifacts are on display.